Water in hydraulic, lubrication, power transmission and insulation fluids (except water based fluids) adversely affects fluid performance and is therefore considered a contaminant. Water can be present as dissolved and/or free water. In the same way that air is said to have 100% relative humidity when it contains all the water it can hold, a fluid is said to be saturated when it contains all the dissolved water it can hold. It is widely accepted that free water represents the major cause of problems associated with water contamination.

These include additive degradation/depletion, fluid oxidation, corrosion, reduced lubricating film thickness, jammed valves due to ice crystals at low temperature, microbial growth, pump cavitation and loss of dielectric strength in insulating fluids. Therefore, the water content in these fluids should be measured so that equipment operators will know when the amount of water in the fluid is approaching or at the point at which free water will appear.

It is typical to report or specify moisture in oil or synthetic fluids as the absolute water content, which includes free and dissolved water, as well as water in emulsion. This is commonly expressed as percent, or parts per million (ppm) by weight (ppmw) or by volume (ppmv). Most fluid applications can tolerate a certain degree of water contamination, which varies with the fluid, after which the effects of the water become excessively damaging. For example, 200 ppmw water in a phosphate ester based fluid would be considered excellent. However, the same amount in a dielectric fluid would be totally unacceptable, resulting in the presence of free water and the loss of dielectric strength.

The differences between what is acceptable for one fluid and not for another relate to each particular fluid’s water saturation point, i.e. the maximum amount of water that can be absorbed before a phase separation occurs and free water (usually as droplets) is formed in the fluid. Unfortunately, information on the saturation point is rarely available from the fluid manufacturer, and even when it is available, a water level measured in ppmw must be related to the saturation point to assess the severity of the problem.

In addition, the saturation point of a lubricating or insulating fluid can change due to a number of factors, including additive depletion/degradation, fluid aging (oxidation, polymerization/de-polymerization, etc.) and cross contamination with other oils or fluids. This makes comparing a measured water level in ppmw to the saturation point of new fluid of limited use, at best. Figure 1 presents typical data for various fluids found in equipment to illustrate that saturation point varies among different fluids and with temperature for the same fluid. The curves are not definitive and are used only as examples. 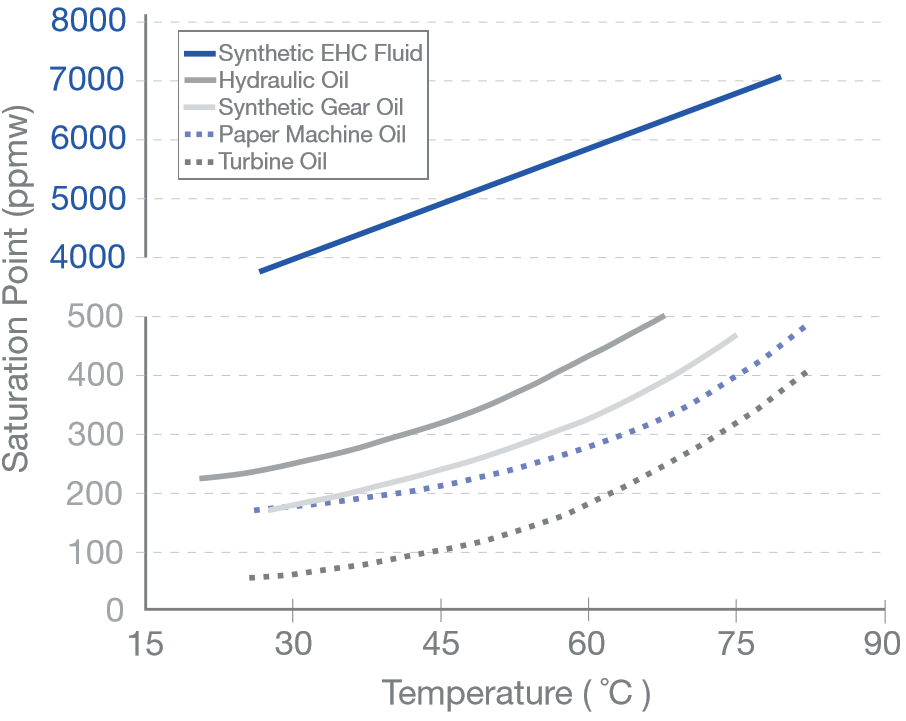 To take the example cited above, although 200 ppmw water could be acceptable for a phosphate ester based fluid, yet totally unacceptable for an insulating fluid, it would be considered desirable if the moisture content of both fluids was no more than 10% saturation. While 200 ppmw would represent less than 10% saturation for a typical industrial phosphate ester, it would take as little as 3 ppmw water to equate to 10% saturation for an insulating fluid at low ambient temperatures.

Figure 2 illustrates the relationship between % saturation and ppmw versus temperature for a typical hydraulic fluid in a system. The fluid in this example contains 200 ppmw of water. When the system is started up the fluid temperature is 15 °C, which corresponds to an undesirable 80% saturation. As the fluid becomes warmer, the % saturation decreases to a more desirable 40% at 50 °C. However, when the fluid’s water content is measured over the same temperature range using Karl Fischer Titration, the results remain unchanged at 200 ppmw. The water sensor was designed to measure a fluid’s water content as % saturation.

The water sensor can be mounted in-line for continuous monitoring and provides a real time display of the % saturation and fluid temperature. No knowledge of the fluid’s saturation point is required for interpretation as % saturation is measured directly.

Figure 2: % Saturation and ppmw vs. Temperature in a Hydraulic System

Therefore, using a water sensor for on-line measurements of % saturation in the system described in Figure 2 would show that at 15 °C, the fluid is approaching 100% saturation, and that phase separation (free water) can potentially occur at slightly lower temperatures. The water sensor can be set to activate a remote alarm at a desired % saturation. In this way, even at low temperatures the possibility of reaching saturation could be avoided.

Free water in hydraulic, lubrication, power transmission, and insulation fluids can reduce fluid performance and adversely impact equipment effectiveness. Since the concern is related to the presence of free water, equipment operators should know when the amount of water in a fluid is approaching the saturation point so that purification measures can be implemented before the damaging effects of water take place.

Therefore, % saturation is a more meaningful and relevant measurement of the water contamination. The Pall Water Sensor was designed to measure both fluid % saturation and temperature. It can be mounted in-line for continuous on-line monitoring or can be used periodically to spot check fluids.