Steam stripping is a more economical option for fractionation (vs. re-boilers). However, it creates a stable emulsion, due to the formation of extremely fine droplets when the steam condenses in the distillate. The resulting stable emulsion is difficult to break with conventional KO devices and traditional liquid/liquid coalescer technologies.

Stable emulsion separations are not well understood by the refining industry, process licensors, and engineering companies.

The engineering company purchased a horizontal mesh pad liquid/liquid coalescer from a major manufacturer of liquid/gas separators for the ULSD project. This coalescer was not able to break the emulsion, leading to very short salt drier life. The inlet and outlet samples around the mesh pad coalescer appeared the same.

The refinery’s ULSD unit was confronted with a shutdown, as it was running out of storage capacity for the contaminated distillate which required reprocessing. (Several days of undisturbed settling were needed to reduce free-water concentrations from 600 ppm to 250 – 300 ppm, indicating that a very stable emulsion was produced.)

As a short-term, stay-in-business solution, the salt bed was replaced with molecular sieve media which has higher water adsorption capabilities than salt. The refiner did not have facilities to regenerate the mole sieve media, so it was replaced when spent. This was a very expensive stop-gap measure.

Following failures to remedy the mesh pad coalescers in the summer of 2006, Pall Corporation was invited to demonstrate its AquaSep® coalescer technology at the customer’s site.

Site testing was performed to establish sizing parameters and water separation efficiency. Inlet total water concentration to the test unit on both streams was approximately 600 ppmv, at operating temperatures of 30-33˚C (86-91˚F). Downstream of the pilot test unit, free-water concentration on the light diesel ranged from 5 to 12 ppmv. On the heavy distillate, the range was 3.5 to 10.5 ppmv free-water measured by the Gammon Aqua-Glo1 method. The Canadian oil company needed to produce on-spec diesel, and they needed help right away.

Pall, an industry leader in Chemical and Polymer technology, was more than ready to take on the challenge. Pall technicians accessed the refinery’s challenges and decided the AquaSep® Coalescer would be the best fit for the job. Pall’s AquaSep coalescer would efficiently separate water from a hydrocarbon stream without disarming the coalescer. Plus, the overall cost of liquid separation is low … especially when compared to other, less efficient, methods.

After the successful site test and proposal submission, the refinery placed an order for vertical pre-filters and AquaSep L/L coalescers for both streams without delay. The order was placed in August of 2006, with a fast-tracked delivery of equipment required by October 31, in advance of the cold weather. (During the winter months, the heavy distillate is iso-dewaxed to lower the cloud point. The IDW unit requires a dry feed stream.) The following equipment was delivered: 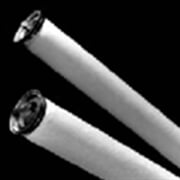 The heavy distillate pre-filter and coalescers went into service on December 20, 2006. Downstream total water levels were 140 ppm (by Karl Fischer titration method), and effluent was “Clear & Bright” (within the required targets). The coalescer sump was being drained every 30 minutes. The refiner was steam stripping more aggressively than anticipated. The extreme stripping maximized light distillate production due to market demands.

This increased the viscosity beyond the design specifications of 6.1 cps to 8.5 cps on heavy distillate. The coalescer continued to perform as designed even at the higher viscosity.

The refiner is very pleased with the performance of the coalescer installation. They stated, “the Pall coalescer has worked as promised.” The inability to produce on-spec diesel was viewed as the biggest problem facing this oil company at the time.

Going forward, the refinery intends to operate with the mol sieves online to remove dissolved water from the ULSD. Mol sieves will be regenerated with hot, heavy distillate direct from the fractionator. The wet distillate will then be recycled back to the AquaSep coalescer for free water separation. The coalescer’s longer life and superior liquid separation efficiency, is set to help minimize downtime and help the refinery save for years to come.