Environmental considerations and stringent Federal and local regulations governing serviced fluid disposal and pollution prevention have become an accepted fact of life in industry. This has resulted in higher costs and liabilities being involved in fluid disposal. There is increasing awareness of the major economic benefits associated with extending the service life of hydraulic and lubricating fluids which include reduced fluid disposal costs and reduced new fluid procurement and replenishment costs.

Hydraulic and lubricant fluids are carefully formulated for specific areas of application and are comprised of a base stock and an additive package. The additive package consists of chemical compounds designed to protect the base stock, as well as system components,to ensure proper performance of the system. Typical additives include dispersants and detergents, anti-oxidants, anti-corrosion, anti-wear, antifoaming and extreme pressure (EP) agents, and viscosity index improvers. Particulate contamination and water affect both the base stock and additives adversely as discussed below.

Physical Properties of the Fluid

Water is a poor lubricant, and significant concentrations of water in hydraulic and lubricating fluids can result in decreased viscosity, load carrying ability, and dynamic film thickness. This can lead to greater surface-to-surface contact at sliding and rolling dynamic clearances, and hence, increased component wear. The presence of free water in systems that could experience low temperatures, below the freezing point of water, can lead to degradation of system performance and malfunction due to 'icing'.

The presence of water and particulate contamination can lead to the formation of insoluble precipitates, viscous sludges and gels. This induces excessive stress on system components, especially in pumps, and the clogging of orifices, nozzles and jets. 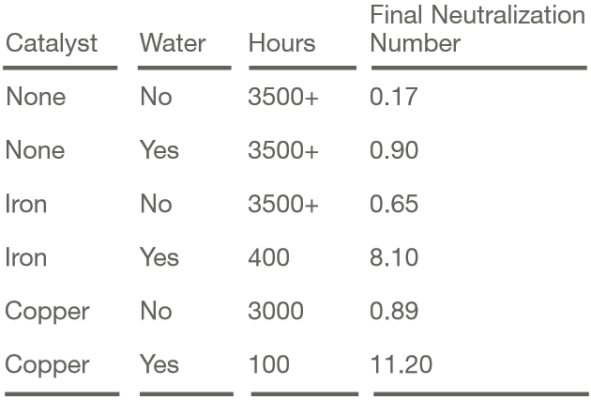 Table 1: Effect of Metal Catalysts and Water on Oil Oxidation

The presence of water in electrical transformer fluid (di-electric fluids) is particularly critical in that it can lead to loss of insulating characteristics and hence, di-electric break down of the fluid.

Degradation of Fluid Base Stock

Oxidation: A primary chemical degradation process in many applications is the oxidation of the fluid base stock. The oxidation process proceeds through a series of chemical chain reactions and is self-propagating, with the intermediate, reactive chemical species regenerating themselves during the process. The process results in the formation of oxygenated compounds, notably acidic compounds in the case of hydrocarbon, poly-ol ester, or phosphate ester base stocks,and, eventually, high molecular weight polymeric compounds. The polymeric compounds often are insoluble and settle out of the fluid as gums, resins or sludges.

Oxidation is significantly accelerated in the presence of metals and water. Metals act as catalysts, and fine metallic debris are especially ideal, in this respect, due to their large, effective surface area. Table 1 summarizes data from tests carried out to determine the effect of metal catalysts and water on oil oxidation. The tests were conducted on turbine grade oil in pure oxygen according to the ASTM/D-943 oxidation test procedure. The neutralization number, tabulated in the last column, is a measure of the extent of oxidation. The results show that the extent of oxidation is greatly increased: roughly 48-fold for iron/water and 65-fold for copper/water within 400 hrs and 100 hrs, respectively, compared to the baseline test without water and metal catalyst (Table 1).

Hydrolysis: Fluid base stocks that are comprised of ester compounds, such as poly-ol esters and phosphate esters, can undergo hydrolysis in the presence of water under operating conditions in the system. This results in the formation of acidic compounds that can react with materials of the system components leading to corrosion and insoluble corrosion products.

Depletion of additives can occur either by their physical removal from the fluid or by chemical reactions in which they are converted to nonfunctional products. The solubility of many additives is critically dependent on fluid composition. The presence of water can lead to the precipitation of these additives from the fluid.

Table 2: Effect of Particulate Contamination and Water on Hydraulic and Lubricant Fluids

Typical on-line water monitors are adaptations of relative humidity measurement devices. They measure the percent saturation of water in the fluid, i.e., free water is 100 % saturation. Portable water monitors can be incorporated in the fluid system for on-line sampling in a continuous mode. Versions of the monitor that can be interfaced with fluid purifiers for automated fluid purification are also under development. The output of the water monitor includes water concentration as percent saturation and temperature. It should be noted that the saturation level for water in fluids is critically dependent on fluid composition (base stock and additive package), actual fluid condition in the system, and temperature.

Removal Of Water And Particulate Contamination

Several methods are available for removing particulate contamination and water from fluids. The method of choice depends both on the contamination level of the fluid and the specific area of application. Heavily contaminated fluids are best subjected to external purification prior to use. In-line, particulate filters and water absorbing filters provide subsequent contamination control. Although a number of methods exist for the removal of free water (e.g.centrifuges,coalescers, and water removal cartridges), only fluid purifiers offer the means to remove free, emulsified, and dissolved water.

In addition to removing water and particulate contamination, fluid purifiers also remove volatile solvents and dissolved gases. Two common types of purification devices are flash distillation and vacuum dehydration systems. In flash distillation systems, pre-heated fluid is introduced into a vacuum chamber so that free and dissolved water, gases and solvents are distilled off, resulting in dehydrated fluid.

In vaccum dehydration systems, the fluid is exposed to a low himidity atmosphere in a partial vacuum chamber resulting in the transfer of free and dissolved water, solvents and gases from the fluid to the atmosphere in the vacuum chamber. To facilitate the transfer, the surface area of the fluid is maximized. In one type of device, shown in Figure 3, the contaminated fluid is introduced into the vacuum chamber via fine nozzles to form a conical, thin film while low humidity air flows through the film. This maximizes the fluid surface area allowing for efficient transfer of water from the fluid film to the air stream which is then exhausted through a de-mister filter to remove any residual fluid in the air stream.

In the final stage of the purifier, the de-aerated and de-hydrated fluid exits the vacuum chamber through a particulate contamination control filter. These fine filters have high efficiency particle removal characteristics in the smaller size ranges: 99.95% or higher particle removal efficiency for particles greater than 3 µm in size, i.e., β3 ≥ 2000, while exhibiting a high dirt retention capacity.

In addition to the removal of particulate contamination and water, the use of ion exchange resins for removal of acidic components from phosphate ester fluids is becoming prevalent. Phosphate ester fluids used in power generation turbines and in the primary metals industry (control systems of metal working equipment) are susceptible to hydrolysis during service, resulting in the build-up of acidic hydrolysis products. In addition to controlling water to reduce hydrolysis, fluid purifiers incorporating ion exchange resin cartridges that adsorb the acidic hydrolysis products are often employed to minimize acid build-up. The extension of the above to reduce acidic hydrolysis products in poly-ol esters used in hydraulic applications is also under investigation.

Experience in the field clearly demonstrates the importance of particulate contamination and water removal in extending fluid service life. Some examples are enumerated below.

A study was conducted at a major U.S. airline on the impact of particulate and water control in hydraulic systems of aircraft ground support equipment: mobile cargo loaders, container rotators, aircraft bridges, and nose docks, on equipment performance. The equipment is located outdoors and exposed to dirt and weather extremes. Initial investigations revealed high particulate levels: 20/16 on the ISO 4406 scale, and water contamination in excess of 1000 ppm, necessitating hydraulic fluid changes every two to three months. In spite of the above,equipment failure was common.

A comprehensive program of contamination control was initiated that included incorporation of high efficiency, fine filtration and the use of portable fluid purifiers. Hydraulic fluid service life was increased to over eleven months, and the water concentration in the fluid was consistently maintained below the manufacturer's recommended level of 200-400 ppm. Particulate levels were reduced to 13/11 on the ISO 4406 scale. Associated benefits included significantly reduced system downtime and improved system performance. 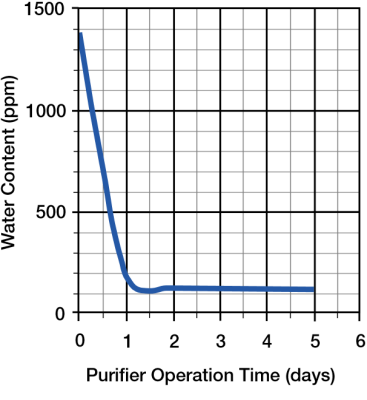 In another study involving phosphate ester fluid, a fluid conditioning system employing vacuum dehydration, ion exchange, and high efficiency filtration was installed at a power plant operated by a major U.S. utility. In the course of nine months, the Total Acid Number (a measure of the concentration of acidic hydrolysis products) was reduced from 0.25 mg KOH/g to 0.12 mg KOH/g, and the water content was reduced from 921 ppm to 265 ppm. In addition, the particulate contamination level was maintained at a nearly constant average level of 14/12 on the ISO 4406 scale. These values meet or exceed the manufacturer's specified values for new fluid: TAN of 0.10 mg KOH/g, water content of 1000 ppm, and particulate contamination level of 17/14 on the ISO 4406 scale.

Water and particulate contamination control in electrical transformer fluids is critical in maintaining insulating properties of the fluid. Figure 6 depicts a plot of the di-electric strength of a transformer fluid vs number of passes through a vacuum dehydration type fluid purifier. 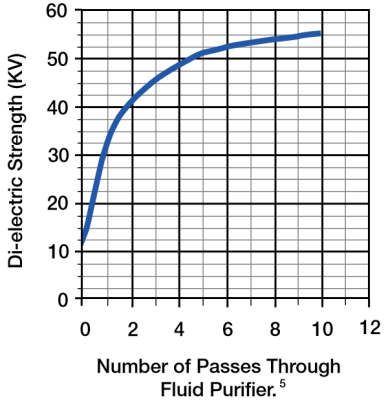 The purification system succeeded in restoring severely degraded transformer oil so that it met or exceeded chemical and electrical values specified by the utility. The water content was reduced from 107 ppm to 15 ppm, the TAN value was reduced to less than 0.01 mg KOH/g from an initial value of 0.20 mg KOH/g, and the particulate contamination level was reduced from 24/18 to 14/12 on the ISO 4406 scale. As a result,the di-electric strength increased from 36 KV to 59 KV, and the power factor decreased from 0.221% to 0.002%.

A reconditioning study was conducted by the U.S.Army to determine the feasibility of a hydraulic fluid recycling program. Specific fluids investigated in the study were MILH-46170 and MIL-H-6083 fluids. Data from successful field demonstrations of fluid purifiers were used to create a guide for recycling hydraulic fluid: Hydraulic Fluid Recycling User's Guide. The User's Guide provides background on the benefits of recycling and recommendations for the military approved recycling procedure for MIL-H-46170 and MIL-H-6083 fluids. The Hydraulic Fluid Recycling User's Guide indicates an expected savings of $2 Million per year after taking into account all of the costs involved with recycling the fluid.

The U.S. Air Force has been investigating the efficacy of purifying hydraulic fluid (MIL-H-83282C), via portable fluid purifiers, for use in aircraft. Based on the investigation, a Memorandum For Record (MFR) 18 concluding that the portable fluid purifier, investigated in the study, purified new and used hydraulic fluids without degrading the working properties of the fluid. The MFR went on to recommend a hydraulic pump wear study.

The results indicated similar pump performance and wear characteristics with new MIL-H-5606F fluid and MIL-H-5606F fluid that was processed through a vacuum dehydration fluid purifier. Testing with MIL-H-83282 fluid is in progress. After completion of the pump wear study, it is anticipated that MIL-H-83282, MIL-H-87257, and MIL-H-5606 hydraulic fluids will be added to the approved recycling list for the military. The annual savings from recycling hydraulic fluids in the U.S. Air Force is estimated to be $30 Million.